Well,well,well, no shock here then! So the council again know best? The Skip by the sea, Porth whatever, and the sports venue have done nothing for Colwyn Bay, what it needs is class, not crap. The new 34 million council offices won't do anything either. Colwyn Bay is tarnished as Brown Town and so much more, it needs loving again, and the towns folk listened to. Restore The Pier, link the town to the beach, bring back the trams, make the town back into a tourist area, restore the shops, the old job centre needs to go as parking, and all of the shops should have Victorian shelters outside, like Cheshire oaks, and empty shops bought by the council and rented for 2 years free rent, with all current shops having rents or rates reduced, make it special and interesting.
It has such a bad name that recently when the Rothsea Hotel was demolished the new owners advertising the flats claimed it to be in Rhos on sea, not Colwyn Bay, despite in not being in Rhos, as they knew they wouldn't sell in the Bay, that say's it all really. If only the council would listen, too much to hope for sadly, hurts though. 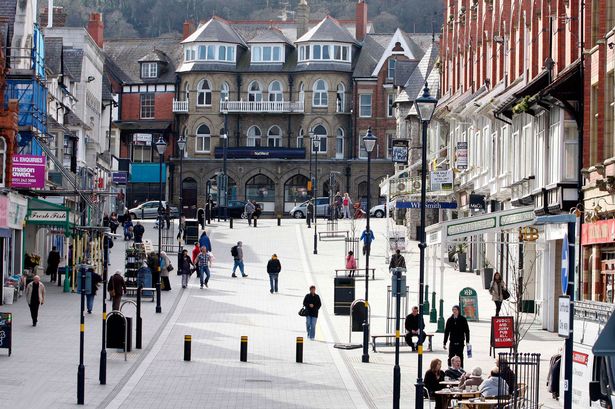 Colwyn Bay is languishing in the worst 10 performing towns in the UK when it comes to house prices.
Halifax's property index for 2015 places the seaside town second from bottom of the 2015 house price league.
It says the average house price in the 12 months to November year was £148,272, down from £151,701 the previous year.
The town was one of the few places in the UK that saw house prices fall over this period and only Merthyr Tydfil in the South Wales valleys had a worse year.
The better news for homeowners in the town is that estate agents are predicting a rise in prices across the region in 2016.
READ: North Wales estate agents predict house price surge in 2016
Martin Ellis, housing economist at Halifax, said: "A small number of towns recorded modest declines in house prices 2015: Merthyr Tydfil in South Wales (-3.8%), Colwyn Bay in North Wales (-2.3%), Durham (-2.1%), and Coalville in Leicestershire (-0.5%).
"These areas are typically still suffering from relatively weak employment and economic conditions, which has dampened local housing demand.
NORTH WALES PROPERTY INSIDERS

8 OF NORTH WALES' MOST EXPENSIVE HOMES

"Those areas that have seen the biggest house price increases over the past year are either in outer London or within close commuting distance of the capital.
"Demand in these areas has risen as rapid house price rises in central London in the past few years have caused increasing numbers of people to look for property in more affordable areas."
READ: 7 of North Wales' most expensive properties sold in October 2015
Newham in London recorded the biggest percentage rise in house prices among major UK towns and cities over the past year.
Based on Halifax's own house price data, the average house price in the London borough was 22% higher than in the previous year, increasing from £261,399 to £319,522 in 2015. This is nearly double the 12% increase in London as a whole.
Royston in Hertfordshire experienced the second biggest rise in average house prices with an increase of 19%. All ten top performers are in London and the South East.
see- http://www.dailypost.co.uk/business/business-news/colwyn-bay-house-prices-among-10658754#comments-section

What a terrible article, Who owns the building? Let's all hope it's not the Council as everyone knows their contempt for listed buildings, And what is being done with the building? What about the vandalized former Ethel Austin's store, with it's doors and windows kicked in just opposite? Also lets plug new council offices that are not needed or wanted by the public, for over 36 million, but here it says 4 million? What happened to the remaining 32 million, has it been given away by the Chief exec? (again?)


Breathing new life into a building modeled on ‘The Library’ in Jordan, centralizing council staff from 20 weird and wonderful offices and swapping old shops for swish apartments.
That’s all part of the plan to kick-start Colwyn Bay in 2016... and it’s all underpinned by lionel Richie’s eagerly anticipated concert at Parc Eirias on June 19 next year. Cllr Chris Hughes, Conwy’s cabinet member for communities, said: “It’s been a positive year for the Bay with lots of exciting projects in the pipeline.”
One project is to redevelop a Grade II-listed building – former cash and carry shop – on Abergele Road opposite the old Woolworths.
It was designed by renowned architect Sidney Colwyn Foulkes, who won praise during his career from the great American architect Frank Lloyd Wright and Portmeirion architect Sir Clough Williams-Ellis.


You have got to admire a mission statement like this!
Love it, Can't wait, where do I sign?

We oppose the planning application for CCBC’s new offices in Colwyn Bay. We object on the basis of poor value for money to the taxpayer as a 36 million pound PFI scheme. The proposed architecture is insensitive; symbolizing “ panopticon" in a town where 50% of residents are subject to a Council means test. The Panopticon is a type of institutional building designed by the English philosopher and social theorist Jeremy Bentham in the late 18th century. The concept of the design is to allow all (pan-) inmates of an institution to be observed (-opticon) by a single watchman without the inmates being able to tell whether or not they are being watched. Although it is physically impossible for the single watchman to observe all cells at once, the fact that the inmates cannot know when they are being watched means that all inmates must act as though they are watched at all times, effectively controlling their own behavior constantly.
This ego trip for the council is not wanted or needed in the town, and as for 700 staff boosting the town? Well the current job center and tax office alongside the college below that employed over 500 people failed to boost the town, how will this be any different? And what about parking? We need to stop this madness and get the Welsh Government to step in, look what the council has done with the Pier, and here we go again, madness, total madness. A media petition will follow.

And below is the intended Carbuncle that will join the Skip, sorry Porth Whatever as destroying another Colwyn Bay skyline with yet another award winning Monstrosity. 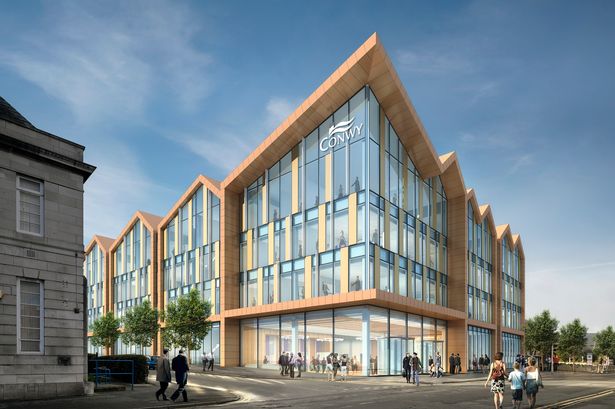 And below the hated Skip by the sea. 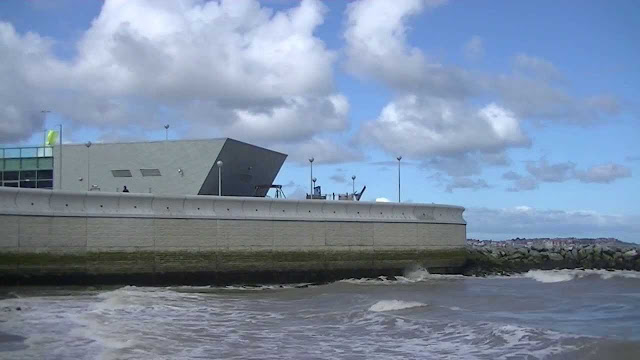 These are the first images of a multi-million pound development in the heart of Colwyn Bay - aimed at regenerating the seaside town.
The project to provide new office accommodation in the centre of Colwyn Bay and to redevelop the Civic Centre building to the east of the town is to get underway in 2016.
Conwy County Borough Council announced in September that Muse Developments Ltd had been chosen as the development partner for the project.
Now Muse has released these images of the plans for the tax office site on Coed Pella Road.
Wes Erlam, development director at Muse Developments, said: “We’re delighted to be chosen for this exciting project which will help the Council to operate more efficiently, reduce its carbon footprint and act as a catalyst for the wider regeneration of Colwyn Bay town centre.
“We have an extensive track record of delivering similar successful schemes, and we’re looking forward to working closely with the Council to deliver an exceptional development for the benefit of the town and its residents.”
The new office accommodation in the centre of Colwyn Bay could potentially replace up to thirteen existing offices and reduce the Council’s accommodation and carbon footprint.
READ: Colwyn Bay businesses back BID to raise and spend £1.25m regeneration pot
With a Gross Development Value of approximately £36m for Phase 1, this new development is a key part of the Council’s commitment to regenerate Colwyn Bay town centre.
The development also promises some direct benefits for the area’s businesses and trades, starting with a Meet the Buyer event early in the New Year, so that local sub-contractors and suppliers can learn more about opportunities as part of the construction.
Council leader Cllr Dilwyn Roberts said: “Bringing people into the heart of a town, brings vitality, footfall and spend. We feel passionately this development is right for Colwyn Bay and Conwy County Borough.
"We’re looking forward to the challenges and opportunities of the coming months.”
A public information event will be organised in January to give everyone an opportunity to look at the proposals, before the detailed planning application is submitted for the new offices.
If all goes to plan work is expected to start at the town centre site in summer 2016 and to be completed in 2018.
Muse will then progress to the Civic Centre redevelopment, with an anticipated completion date in 2019. They have not yet confirmed what the plans are for that site, with a hotel and housing among the proposals.
on December 16, 2015 No comments:

Just some Gossip about the Skip, Colwyn Bay .....

A contact of mine works for the Local authority, where It would seem that they are less than pleased with the poor to mixed views from Bryn Williams Skip Bistro, I have been informed that staff have been asked to leave outstanding reviews for the Skip Bistro, and many are doing so! However it of course just gossip, but those in the Know will be able to spot the council staffs reviews, from other members of the public, and some staff reviews clearly stand out, and are always excellent, "strange " also staff have discounts at the venue, Apparently!


I must admit i have been here many times each time gets better and better.... Its our new favourite place for sure... Granted had teething problems to start but looks like a well oiled machine at present with exceptional food... And a great new managment team front of house... Dioch yn fawr am noson pleserus
"Odetts" it is not!!”


Dramatic site on the prom at Colwyn Bay in the new build. Friendly staff but very average food as judged by the fish pie, served as a big pie between two, (significantly missing the fish and also, for the first time in eons, getting me to ask for some salt). Served with more peas - a significant component of the...
“Saturday night”


Visited on Saturday night having booked online; a nice table for two by the window as requested. Very attentive and polite service, lovely meal; although very busy, the staff were all efficient and courteous. Also, very reasonably priced; would recommend and we will return soon.

Reviewed 9 September 2015
Was looking forward to trying this out, but we turned up for breakfast and were told it was finished, despite saying on the menu it was half an hour off.
We stayed and had an expensive coffee and bought in cake. One of the things that really was unpleasant about the place is the shared toilet with the beach, so everyone from outside just stomps in to use the toilets,noisy and the toilets were not too clean either.
We came back a week later and had an evening meal, but to be honest the lobster we both had was small and tasted off, and yes people come in from outside to use the toilet in the evening too, not a pleasant relaxing experience, cost wise,menu wise, and tranquility wise.