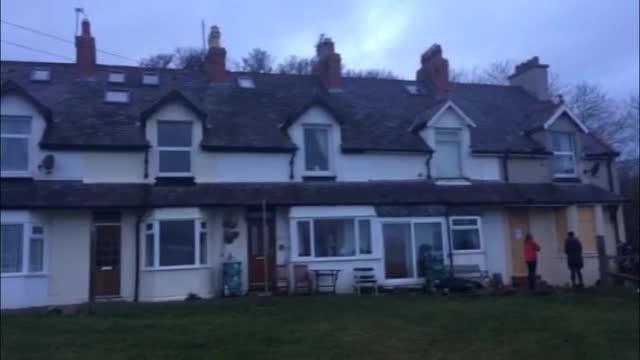 I say again Loudly, Llandudno is getting very rough!
https://thechroniclesofruination2.blogspot.co.uk/2016/12/llandudnonorth-wales-jailbirds-great.html

A judge has ordered the closure of a remote terrace cottage for three months after neighbours had to endure rowdy parties, suspected drug taking and anti-social behaviour.
A court at Llandudno heard the house (number seven) in the otherwise peaceful Cyll Terrace on the Great Orme was owned by Arthur Owen who is serving a jail term at Risley prison, Warrington.
Julia Longworth, a solicitor for Conwy Council, who applied for the order said: “It appears people are given the key and come and go as they will.”
The house had a steady stream of visitors and neighbours lived in fear of their anti-social and aggressive behaviour.

On one occasion an "axe-type" tool was hurled at a neighbour, who managed to dodge it, Ms Longworth added.
Two men from Manchester had been arrested in connection with that incident, the court was told.
An anti-social behaviour officer for Conwy Council described in a statement how neighbours had been left feeling "extremely nervous and vulnerable" and one couple wished to be re-housed.
Problems linked to the house allegedly dated back 14 years but neighbours had been too scared to complain officially.

Most of the visitors were believed to be in their 20s or 30s and young men in their boxer shorts and some naked youngsters had allegedly been spotted urinating outside.
There were also issues about rubbish and overflowing recycling bins and one neighbour said visitors peered through his lounge window.
District Judge Gwyn Jones granted the three-month closure order.
Breach of the order by accessing the house is a criminal offence carrying up to three months imprisonment or a fine.
http://www.dailypost.co.uk/news/north-wales-news/jailbirds-great-orme-party-cottage-12315844
on December 14, 2016 No comments:

Justice for Kitten beaten to death by staff at The Royal Oak Hotel in Betwys-y-Coed. 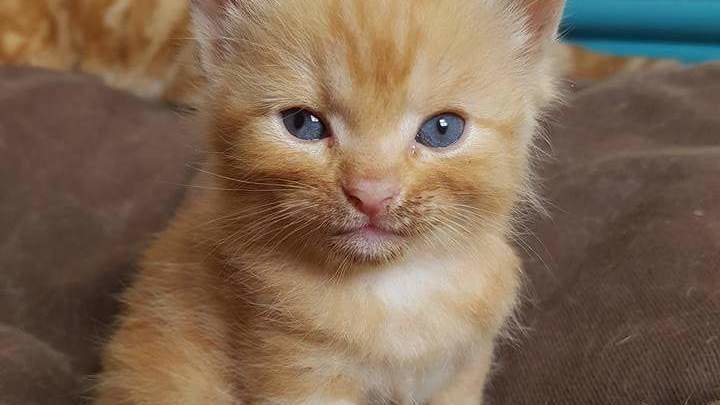 We the undersigned demand justice for the kitten beaten to death by staff at The Royal Oak Hotel in Betwys - y - Coed. North Wales.
Hotel bosses have admitted staff killed the kitten, but insisted in a now deleted Facebook status that she was " humanely killed"
The only person qualified to "humanely euthanise" a cat is a qualified Vet.
We demand the RSPCA prosecute those responsible. They must make an example of those responsible for this cruel and unnecessary act.
Members of the public simply can't go around killing animals whenever they choose.
This poor, defenseless, innocent, kitten was simply hungry. They could have handed the cat to the RSPCA or a local shelter. There was absolutely no need to commit this vile act.
Glen Evans, Head of the hotel says he didn't believe the staff have broken the law. We believe they have.
RSPCA please do the right thing. It is obvious they have broken the law we demand that you do not let them get away with it.

I have dedicated my life to animal rescue including many cats. This has both angered and saddened me. Please sign my petition and let's get this beautiful kitten justice. Thank you. Shena x

This petition will be delivered to:
Shena Louise started this petition with a single signature, and now has 81,353 supporters. Start a petition today to change something you care about.

Betws Y Coed.... Would you go there now? 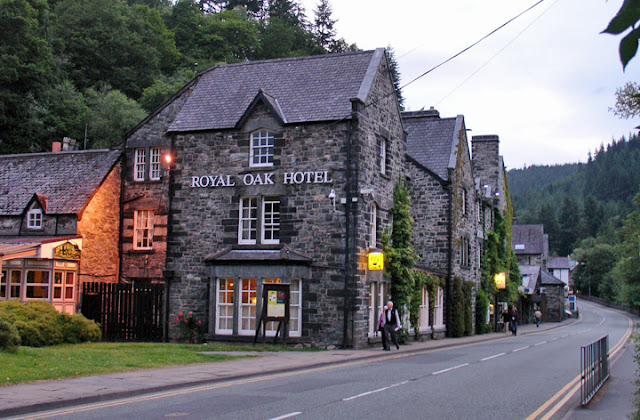 To sign Petition, click link, https://www.change.org/p/rspca-justice-for-kitten-beaten-to-death-by-staff-at-the-royal-oak-hotel
A petition calling for action to be taken against staff at a Betws y Coed hotel who killed a cat has reached nearly 73,000 signatures in just four days.
Thousands have voiced their outrage after the feral cat died ‘humanely’ at The Royal Oak on December 2.
The online petition calling for “justice” for the animal has signatures from as far as America, Dubai, India, Nepal, Switzerland, Italy, Austria and Canada.
The petition states: “We demand the RSPCA prosecute those responsible. They must make an example of those responsible for this cruel and unnecessary act.
“Members of the public simply can’t go around killing animals whenever they choose.
“This poor, defenceless, innocent, kitten was simply hungry. They could have handed the cat to the RSPCA or a local shelter. There was absolutely no need to commit this vile act.”
Betws y Coed hotel staff SACKED after feral cat death
Following the feline’s death, manager Glenn Evans said two employees have since been sacked as a result of the death, which the RSPCA is investigating.
Hotel bosses have admitted staff killed the kitten, but insisted in a now deleted Facebook status that he was ‘humanely killed’ and denied claims it had been killed with a rolling pin.
Mr Evans said that following the incident members of team, unconnected with the incident, have been subjected to verbal abuse and violent threats.
He added that the two employees sacked did not follow company policy and “acted independently”.

He said: “We have been deeply affected by the impact this has had on the village and the people who work and live here and can only apologise for the anxiety, frustration and hurt they have felt.
“The individuals involved did not follow company policy or procedures and at no time sought our advice, they acted independently of any company or regulatory instruction.
“We can now only look to supporting the team and revisiting the structure of the training and support whilst awaiting an outcome from the RSPCA.
“We have taken advice from specialists within the industry and will be implementing their recommendations and guidance immediately.
“We know it will take a lot of hard work to regain the public’s confidence in us. We are very sorry we didn’t deal with this incident in the appropriate manner in the first instance and take full responsibility for that.”
Rhyl terrier on the run for six days finally brought to heel by posse of 40 people
The RSPCA have said they are taking the matter “very seriously” and are continuing to probe the incident.
The petition can be found online .
http://www.dailypost.co.uk/news/north-wales-news/petition-demanding-betws-y-coed-12310719
on December 14, 2016 No comments:

Colwyn Bay..... I wonder why the Council hate the Pier so much? 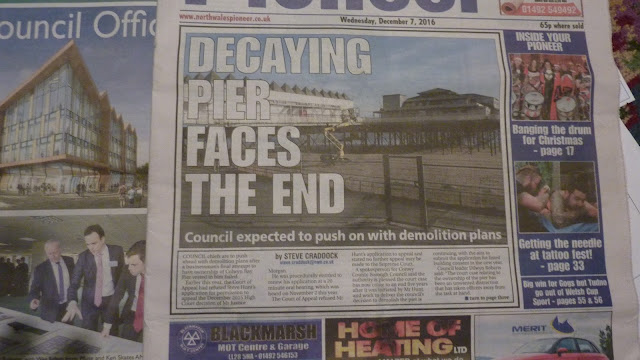 However praise for Abdul Khan and the town council for seeing sense, but the press do appear to be biased in their reporting as well as printing a number of incorrect statements. A little birdy told me that court action by a person or persons, may be in the Pipeline following a number of shall we say Breaches by the council regarding the Pier. 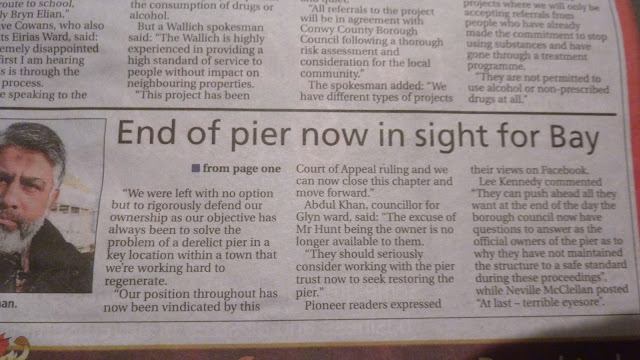 Something nasty was posted through our door today in Old Colwyn, has anyone else had this dire Council news letter?
Well news reaches me that these offices were to bring work into a deprived area, and the plan was for all council offices to close and for staff to move to this block, so why are the NHS going to be moving in as well? 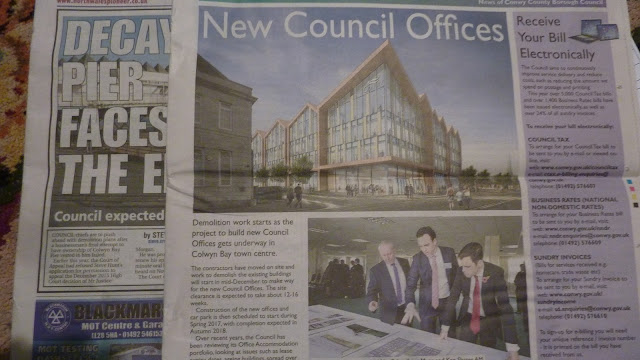 It seems that two NHS community facilities are to close, One in Llandudno the other in Colwyn Bay and the staff are all going to be shoved in the build ( I bet their thrilled!) apparently not. Does anyone have any more news? To two sites to close are to be flattened for block of flats! Now there's a shock!!!!! 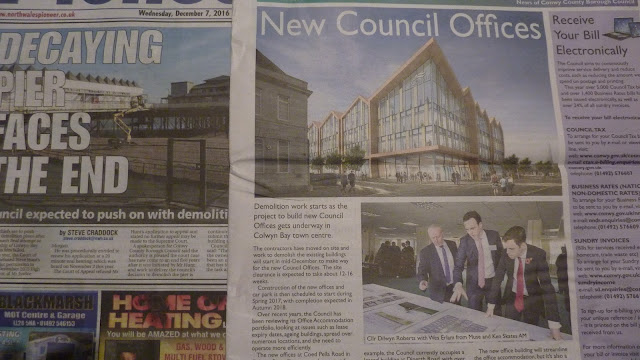 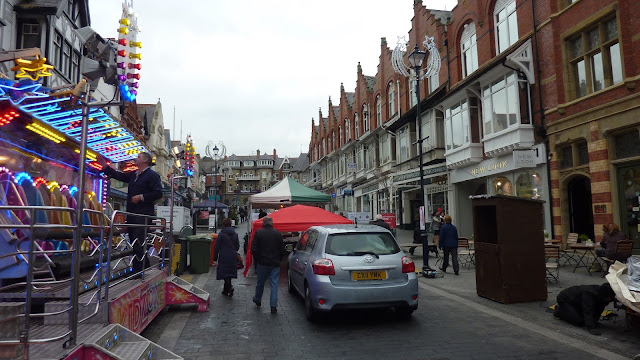 Yes a tram came later and some Donkeys, but that's all! What a waste of time, and money, and on December the 2nd! 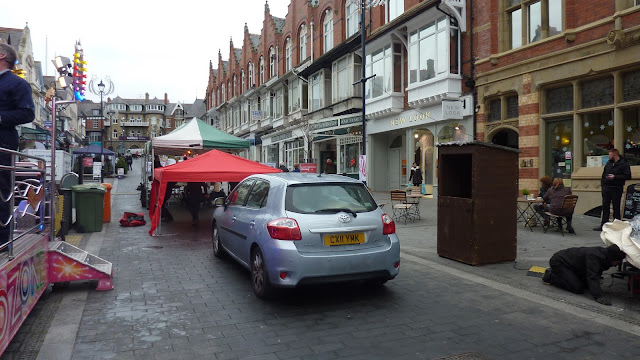 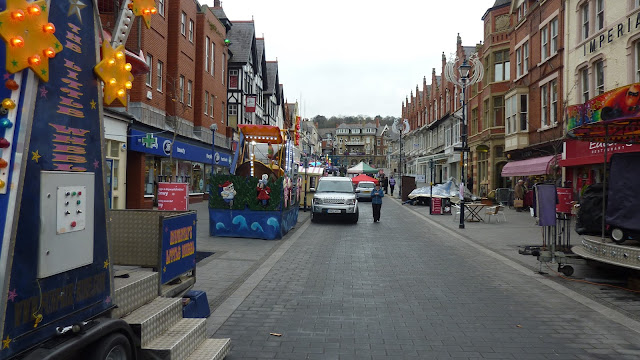 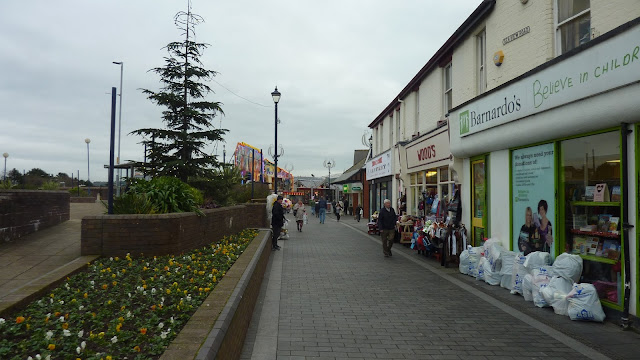 Rhos On Sea... Pet Graves to be Destroyed as Arts And Crafts House is Bulldozed For Flats! 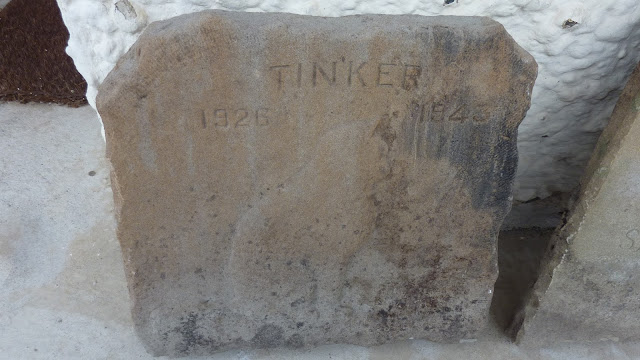 Sickening! Have these developers no shame? CLEARLY NOT!!!!!!!! 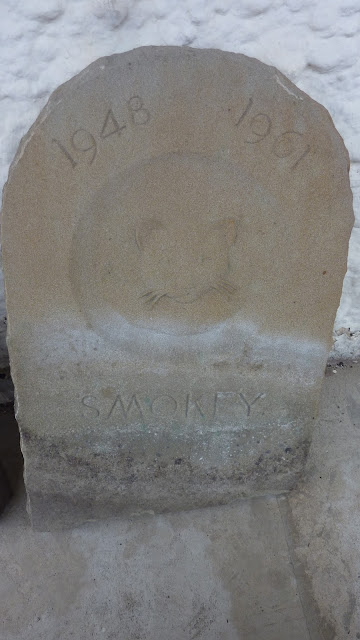 Clearly these animals were very loved, The headstones have been ripped up off the graves ready for the bulldozers! 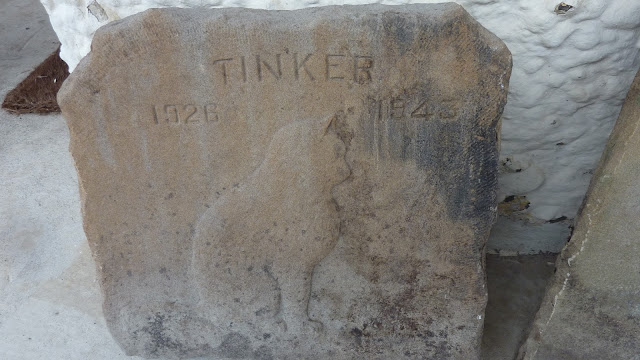 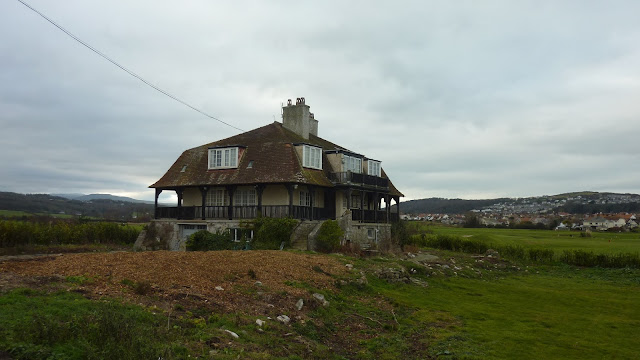 It looks like Demolition has started on this Art Deco House in Rhos on Sea, all for a block of flats! Very sad news indeed, neighboring properties are very upset about this and are already putting their houses up for sale. In fairness who wants to live next door to a Ghastly block of flats! Sadly there is very little left in Rhos to now be demolished, and just by the golf course up the road, The Arts and
Crafts house is also soon to be demolished for another block of flats.
The good news that he is doing a website for all of the buildings that have been demolished in the area, or are awaiting demolition, and the "mess"  that has replaced them. He states that "I want people all over the world to see how lovely these areas once were and the mess they are now" The site will apparently be mirrored on Twitter, Flickr, and Instagram and promises details on the objections, history, etc, We Can't! 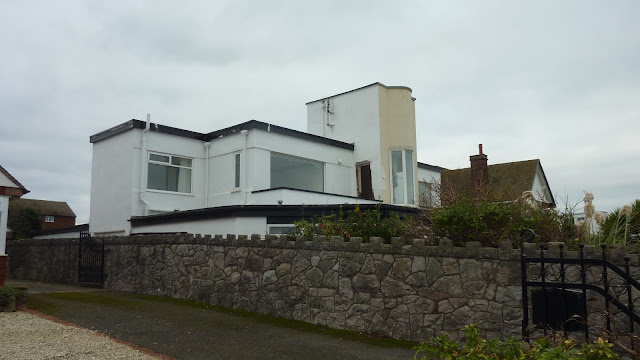 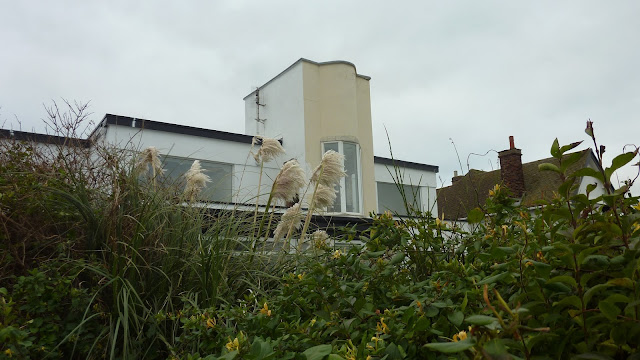 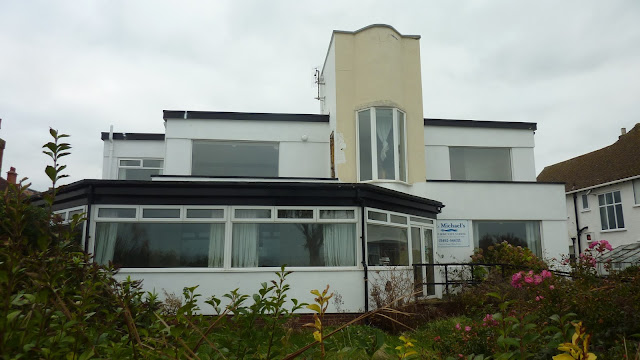 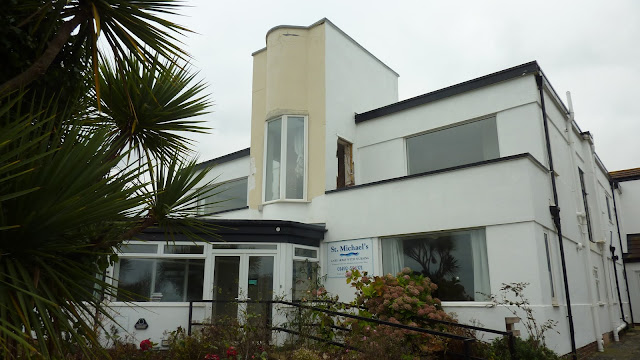 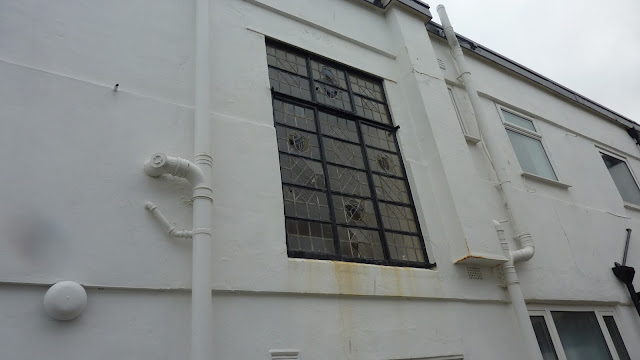 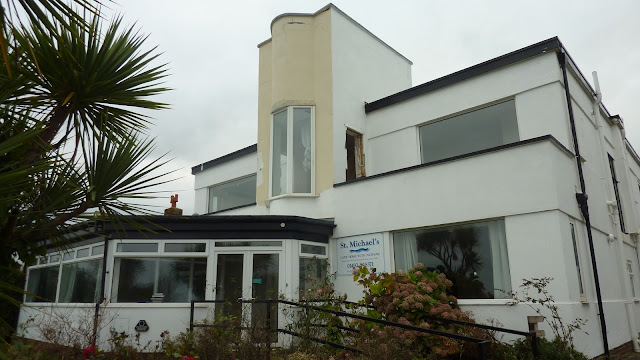 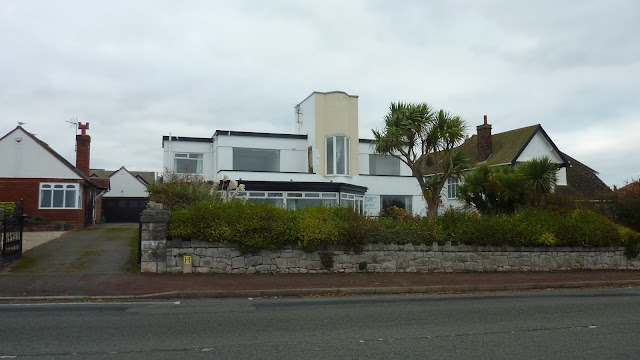 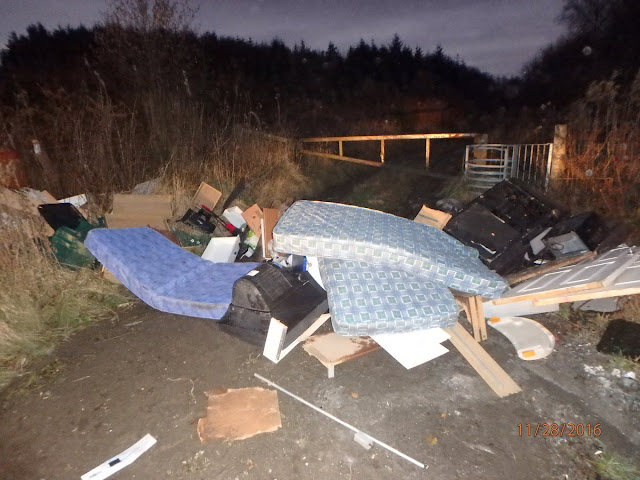 Appeal launched after pile of rubbish dumped in Conwy

Picture: North wales Police Rural Crime Team
An appeal has been launched after a pile of rubbish was found dumped in Conwy.
Rob Taylor, team manager for North Wales Police Rural Crime Team, said the rubbish - which includes mattresses, doors and even a television - was found at Bryn Dansi Woods near Llanelian and reported at 7.30am yesterday morning (Tuesday, November 29).
Mr Taylor said an investigation of the rubbish, including a search for fingerprints, will now take place but officers have already discovered documentation with names and addresses among the debris.
He said: "Have you asked anyone to dispose of any rubbish for you recently? Do you suspect a neighbor or someone else of dumping rubbish? Call 101 and ask for the rural crime team."
In a post displaying the rubbish, @NWPRuralCrime tweeted: "Oh dear, the tipper forgot about some letters in the rubbish with names and addresses. Keep your ears out for the doorbell sir. Enroute!
"You thought you would save money didn't you? Did you take into account DNA, fingerprints and documentation. Big mistake. See you soon."
Mr Taylor also said incidents such as these can be very dangerous to surrounding animal habitats.
on December 03, 2016 1 comment: