Llandudno...Litter firm issued thousands of fines over a year in just one county...and 40% were in one town 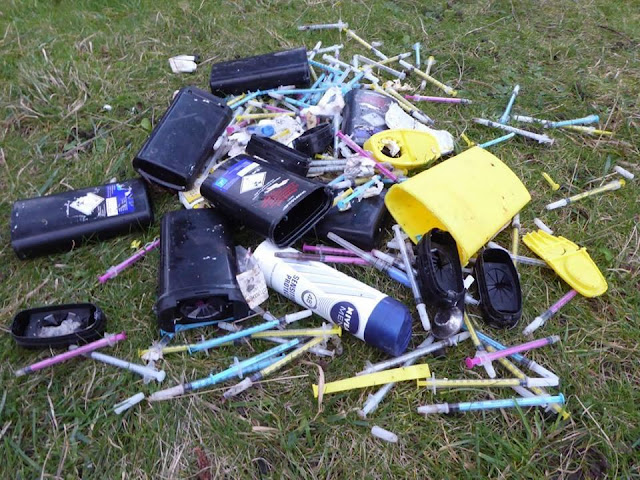 Mrs Colwyn Bay states...Llandudno is filthy, the picture above shows just one litter collection of drug needles in one day!


A Conwy seaside town saw more littering fines handed out by controversial firm Kingdom than anywhere else in the county last year, it’s been revealed.
Figures from a Freedom of Information request show Llandudno topped the list for fines in seven of the 12 months in the last financial year.
Of the 3,360 fines for littering in Conwy in the last financial year, 1,350 were given in the town.
Llandudno had 125 fixed penalty notices given out in April 2017, with Conwy in a distant second at 68.
It accounted for just over half of the fines given by the firm in that month, which saw a total of 245 notices given across the county.
In the same month, Kingdom officers tackled dog fouling five times, with fixed penalty notices being handed out twice each in Conwy and Llandudno and once in Llanfairfechan.
Llandudno was not the number one town for littering fines in the months of August, November, December January and March.
But the town had the highest number of recorded incidents where action was taken in a single month in October, when 261 littering fines were handed out.
The lowest number for Llandudno was in November when 35 fines were issued.
Kingdom had been the subject of controversy since it was brought in to enforce littering rules in the county four years ago.
There had been criticism of the way its staff had dealt with members of the public and concerns that it was targeting larger towns for action.
Earlier this month, councillors on the county’s cabinet voted to offer the company a contract extension that would have finished at the end of this financial year instead of the full year that had been recommended by council officers.
But the firm turned this offer down and is due to finish its work in the county in early August.
At the time, Cllr Mark Baker, cabinet member for community development services and regulation said: “We wish to reassure the people of Conwy that the environment remains one of our top priorities.
“The vast majority of the people of Conwy are very conscientious: they don’t drop rubbish, they pick up after their pets, and are mindful and considerate towards the environment.
“But we would ask that any incidents of littering, dog fouling, or other concerns are raised and reported to us as we will act swiftly to deal with these.
“The services of Kingdom are just one part of the environmental jigsaw and we will tackle any issues raised with us to ensure the county remains a clean and desirable place to live, work, and visit.”
A spokeswoman for Conwy Council said: "Keep Wales Tidy state that pedestrians are the main source of litter.
"So, where there are more pedestrians, there will be more littering, hence the focus for enforcement on areas/hotspots with most pedestrian traffic."
Original article from...https://www.dailypost.co.uk/news/north-wales-news/litter-firm-issued-thousands-fines-14970891

Popular posts from this blog

August 21, 2016
Mrs, Colwyn Bay Says.....A very funny story! I just love Warped Wales https://www.facebook.com/warpedwales/I was there for like ten minutes
POSTED BY: WARPEDWALESJULY 20, 2016 A TV actor and hard man Ross Kemp was at the sticky end of a Rhyl robbery this week, just days after returning unharmed from a trip into ISIS-controlled territory for Sky One. The 51-year old’s hazardous journey took him into the heart of an Islamic State stronghold, where he regularly came under fire in what he described as one of the “most terrifying” moments of his life. Despite the huge risks faced in what is considered to be “the most hostile place on earth for westerners”, Kemp returned last Thursday unharmed, only to be mugged outside a newsagent on Sussex Street in Rhyl. Speaking from home this afternoon, the ex-Eastenders man said: “I was in the territory being occupied by one of the most vicious terror groups in recent times. It’s virtual suicide, but I made it. Ten minutes in Rhyl and I’m at the police…
8 comments
Read more

About Me - Email me at ColwynBayLife@protonmail.com