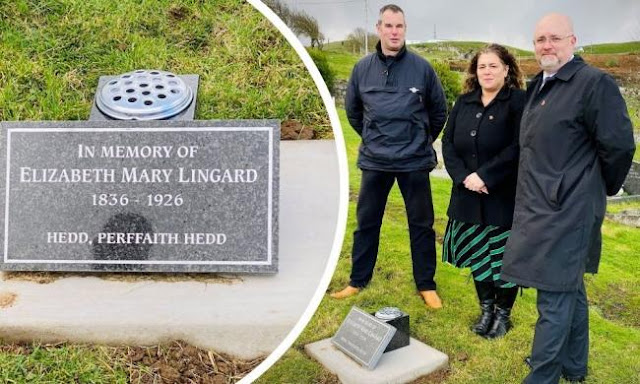 What a lovely story, well done to them.

A MEMORIAL has been placed at the grave of a Victorian woman in Llandudno who was reported to have “died of excitement” at the age of 90.

Elizabeth Lingard, born in 1836, was buried at the Great Orme Cemetery like many of the “pioneers” who came to Llandudno during its rise as a popular holiday resort in the mid-19th century. She had run a boarding house on the promenade after moving from London, until in 1922 when she has fallen into poverty.

But she believed she had struck gold upon reading a newspaper article in 1926 that said her first edition copy of John Bunyan’s 17th century ‘Pilgrim’s Progress, given to her by her mother, could be sold for a high price.

During this time, she lived on the generosity of a distant relative in the house of a former servant on Taliesin Street, and the dividend from the sale of the book could have meant that she would not spend the late winter of her life in abject poverty and die a pauper.

Elizabeth wrote to a relative in Warwickshire who told her to package it up and forward it to her and she would look into its sale. She took the parcel to the post office on Vaughan Street and returned to her lodgings, where she excitedly told her landlady, Mrs. Parry. As she turned to climb the stairs, she suffered a seizure and although Dr. Caldecott was called, she died

As the 90-year-old was destitute and had no family or children in Llandudno, with the only mourners at her funeral her landlady and relative in Warwickshire, it is likely that no headstone was ever placed at her grave.

However, during the Covid-19 pandemic, local historian Adrian Hughes, owner of the Home Front Museum, carried out archive research into the Great Orme Cemetery as "something to do" when he stumbled across Elizabeth's "fascinating" story. He visited her grave and found the grave to be without a headstone, and shared her story on social media. There was a feeling among residents that a headstone should be put there.

It was then that Jonathan Harty, of Lord-Brown & Harty Funeral Directors in Trinity Square, Llandudno, decided the company would help to mark Elizabeth’s grave for the first time in nearly 100 years.

The directors arranged for the headstone to be made free of charge, while Conwy County Borough Council did not charge a fee for a permit.

Mr Hughes said: “It says a lot that nearly 100 years after Elizabeth died, complete strangers would go out of their way to mark her grave. It shows real community spirit.

“People see and have empathy for Elizabeth much as we do for older people today.

“Elizabeth was one of the pioneers who came to Llandudno while it was growing as a resort and contributed greatly at that time.”

Mr. Harty added: “It is a shame that there was never any memorial for Mrs. Lingard, and we were in a position to do something small to help.

“She had such an interesting story and had lived to 90 years old despite being in poverty.

“We don’t know whether the book was the cause of her death, and certainly wouldn’t record her death in that way today.

“Great Orme Cemetery is full of fascinating graves and history, and it is an attraction for visitors. The memorial is now there as something for people to go and see.”