Llandudno ....Fence to be Removed after Complaints, Despite Houses Looking Far Worse! 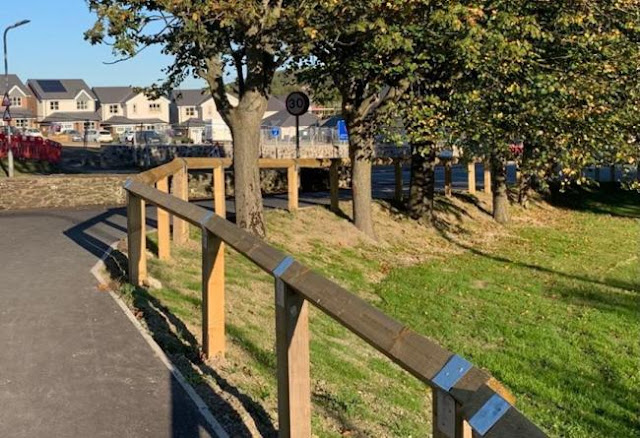 I don't often praise the council, but at least they put a fence there, but residents thought it was ugly! Well, the houses right by it a far uglier and cheaper, and I would have taken those down before the fence!

A NEW wooden fence erected following the creation of a cycle path in Llandudno Junction is to be removed by Conwy County Borough Council following negative feedback from residents.

Councillor Sue Shotter, who represents the council’s Marl ward, said she had received numerous complaints about the fence, which replaced a stone wall on Marl Lane.

The cycle lane was constructed earlier this year and cuts across Albert Drive, across Pentywyn Road, and on to Marl Lane.

Councillor Shotter had initially urged the council to make improvements to the fence, which she described as ‘horrendous’ and ‘not very good to look at.

But she said she received an email from the site manager last week saying that, due to the disappointment widely felt towards the new fence, it will be removed.

“It’s a good solution but unfortunately, they had to remove a lovely wall, which they had to do because it was either that or the trees so, naturally, the trees had to stay.

“It’s a good solution, to a point. I’d prefer the fence to not be there instead of there. Nothing is going to replace it, which is quite disappointing.

“The residents in my ward are fantastic; they don’t complain about just anything; they try to let things bed in and see if it’s going to be successful. Unfortunately, this most certainly was not.

“I would have loved a wall to actually protect the green, to make it a little bit more private, because it’s gone from something that was private to something that’s very open now.

“It’s a difficult decision, because the cycle path is new and they want to try and encourage people to cycle, so, unfortunately, the green has had to lose some of its features.”

The decision to remove the fence was confirmed in a statement from Conwy County Borough Council, which said: “We’ve written to Councillor Shotter to confirm that we’re removing the fence.”

Opposite the wooden fence is another stone wall, in front of a development site led by Llandudno Junction company, Beech Developments.

The fence is also found by a small field where children play, and Jean Owens, who lives on Tan-Y-Gaer, a road that overlooked the fence, suggested that a box hedge plant may be a cost-effective, low-maintenance solution to keep them safe.

She said: “I came up with an idea of planting a box hedge, or just something to make it (the green) self-contained. I don’t like it (the fence); I don’t think it looks nice.

“I thought they could’ve done something to make it more in keeping with the rest of the area; it does look out of place. I don’t think it's been thought out very well and it doesn’t look nice.

“I don't think box hedges need cutting as much, so I thought something like that, even if not very high, I don’t think need as much maintenance, and wouldn’t be as expensive to do.”