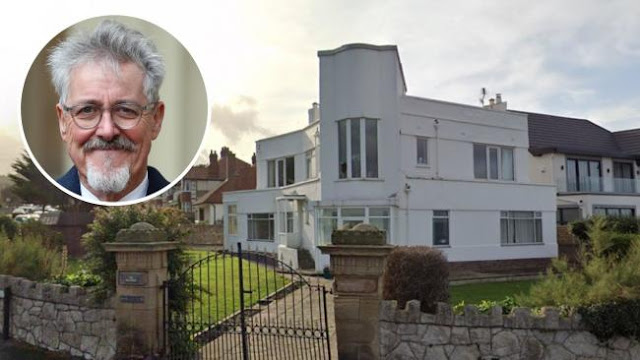 Well done to Griff Rhys Jones for caring. It would seem that the developers have tried to pull a dirty trick by getting a negative Heritage Statement done!

The statement is beyond transparent, money and a block of five flats at the expense of heritage. There is a work, it starts with S and in M and has four letters that describes them perfectly.

THE Welsh comedian, writer and presenter, Griff Rhys Jones OBE, has offered his support to a campaign aiming to preserve a 1930s art deco house in Rhos-on-Sea which is set to be demolished.

Developers Commercial Development Management last month announced proposals for the property, on the corner of Marine Drive and College Avenue, to be knocked down and replaced with five apartments and a car parking space.

Mr Rhys Jones, who is also president of both the Victorian Society and Civic Voice, said in a statement: “I just need to add my voice to the many who object here.

“It is dismaying that there can be such a casual approach to important Welsh heritage. This is important architecture and part of the story of Rhos-on-Sea.”

Mr. Rhys Jones, 68, joins a number of people who have protested against the plans, including Baroness Joan Bakewell, who recently tweeted: “Oh a real kiss if it goes! Isn’t it listed? Does no one care?”

The C20 Society, a charity campaigning for the preservation of 20th-century architecture, has also submitted a written objection to the plans.

A spokesperson for Cadw, a Welsh Government service protecting historic buildings and structures, confirmed today (November 18) that a request to make the property a listed building is still in progress.

A spokesperson for Conwy County Borough Council said yesterday: “Further documents have been added to the application (and posted on the planning explorer).

“You can view them on the planning explorer at www.conwy.gov.uk/planningexplorer. The application number is 0/48885.

“Representations should be made by December 3.”

The property was designed by architect Sidney Colwyn Foulkes, who was born and raised in Colwyn Bay.

The C20 Society described it as 'a striking Art Deco design, which makes full use of its corner plot and seafront location' and 'a unique building that contributes to the historic interest and character of Rhos-on-Sea'.