North Wales ... Reviled Campervans & Motorhomes could be allowed to stay overnight at some car parks after numerous complaints! 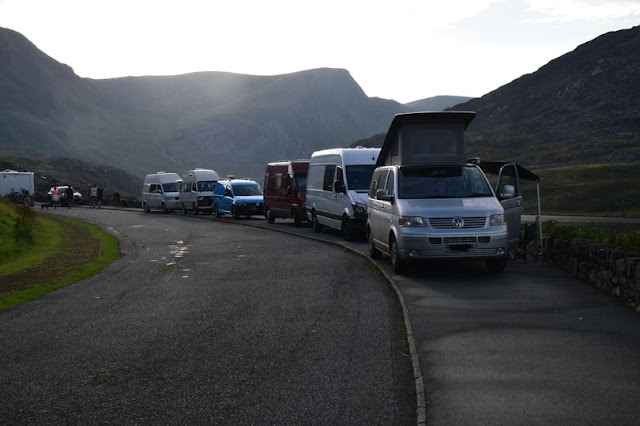 Well something needs doing with them, they will stay anywhere for free, cause mayhem for locals, leave litter and waste, (not all!)

So if this is going to happen good, but they need to pay a fee and anyone caught not paying needs to be clamped and fined, even towed away.

They also need to employ wardens for all areas to monitor this. And if they do not follow it they need banning from parking everywhere.

The law is clear on this on all land the permission of the owner is needed 1st!

Gwynedd Council is to consider allowing campervans and motorhomes to stay overnight in some of its car parks, in light of unprecedented scenes over recent summers.

A cabinet report will recommend up to six pilot areas be set up following concerns over the growing number of motorhome owners deciding to stay in areas where they have no lawful right to do so.

As a result, the authority is looking to spend £100,000 on establishing six French-style “aires” sites on parts of existing car-parks, as is often found on the European continent.

"Aires" are small-scale campsites offering only the most basic of facilities such as waste disposal and water, tending to be cheaper than traditional caravan sites.

But with the report noting that the county’s existing caravan sites have been struggling with capacity issues during the heavy tourist seasons of 2020 and 2021, it's hoped that the basic offering will help reduce the dumping of human waste and litter while also generating some economic benefit.

“The aim of this pilot would be to encourage those visiting in motorhomes to stay in a town or village, offering an element of economic benefit to the local community and better management of the sector,” said Cllr Gareth Thomas, who holds the economic development portfolio.

“With the restrictions of Covid-19 making people less likely to have traveled to the continent over the last two summers, we have seen an increase in people visiting in motorhomes to enjoy Gwynedd’s popular attractions.

“The high numbers of people visiting has been a cause of concern for some areas with some deciding to stay in motorhomes in locations where there is no legal right to sleep in a vehicle overnight.

“That is why we are keen to consider what steps can be considered to improve the management of the field.”

An online consultation over the summer found that 92.2% of motorhome users would use an "air"-like provision if it was available, with the main requirements being fresh water and somewhere to dispose of toilet waste and refuse.

The environment chief, Cllr Gareth Griffith, added: “This would allow us to see if this arrangement better managed the situation, and to consider whether it would help us to have better management in the county in the future.

If the Cabinet consents, work will proceed to secure the relevant rights before any developments.”

The move has been prompted by concerns raised both within and outside of the council, with members having called for a clampdown on campervans and motorhomes “parking where they like” in parts of rural Gwynedd.

The pleas for action came following complaints of both “antisocial campers” leaving litter and human waste in their wake as well as unprecedented scenes of dangerous parking on the roads of Snowdonia and beyond during the summer of 2020.

“We have seen up to 15 of these vehicles on some nights parking in the most remote areas which have no suitable facilities whatsoever,” said Cllr Simon Glyn during a scrutiny committee meeting last year.

“We have hundreds of campsites in Gwynedd which are designed for them, there is no need for them to park in such places overnight.”

If approved, the planning stage would be expected to start in February 2022 with the first pilot sites up and running by the spring of 2023.

The cabinet will consider the report when it meets on next Tuesday, November 9.